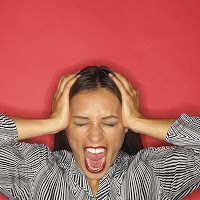 Do you find yourself fuming at the foibles of “stupid people”? Does the current political climate launch you into a torrent of righteous indignation? If you are habitually distressed by anger or if your angry behavior often comes back to bite you, this may be the sign of a personal blind spot.

Anger can be motivating, but it is also an afflictive emotion caused by thoughts and feelings that arise from a lack of understanding (ignorance) or misguided assumptions. It is self-reinforcing in that it brings a burst of energy that can fuel passionate action and create a temporary sense of empowerment. However, acting purely out of anger rarely results in long-term benefit to self or others. This is because an angry reaction is often an impulsive reflex of an unexamined mind. It can never match the longer term, beneficial impact of a wise and reasoned response. Being frequently plagued by anger suggests there may be some further inner work that is needed and this will require turning inward with open-mindedness and curiosity.

…You are the first victim of your own anger… you first harm yourself and then you harm others – You can’t harm anybody without harming yourself… Unless there is peace in the mind of the individual, how can there be peace in the society? – S. N. Goenka

The next time you feel angry, take a look at what is going on inside you. Notice the physical sensations, thoughts, feelings, and emotions that arise. You will most likely find tension, gripping, clenching or heat in the body. Constricted thoughts race through the mind such as, “This isn’t right”, or, “Its not fair”, or “ It shouldn’t be this way.” The mind judges the situation as unpleasant, unwanted, or without value and we experience an urge to fix, fight against, or escape the situation. This is adaptive in that it sometimes contributes to our survival to distance ourselves from unpleasant experiences and approach pleasant ones. But if it is the default response, it can result in unskillful actins that perpetuate harm.

When I say to myself, “It should not have happened this way,” I have to admit that though it may be an understandable thought, it’s also an absurd statement. After all, it already happened. My insisting that it should not have happened is not only unhelpful, it also presumes I have some sort of special knowledge of the rules and workings of the universe. It’s like saying, “The dinosaurs should not have gone extinct”. They did go extinct – it already happened. Once I calm my nervous system, I might instead ask myself, “What, if anything, can I do about it?” In this case, what appeared to be a terrible tragedy to the dinosaurs was actually just part of an impersonal chain of occurrences – so, perhaps the wisest thing to do is to allow myself to grieve the loss. In other circumstances, it may make sense for me to take some sort of considered action, but I will need to tend to my anger in order to do so in a thoughtful way.

Responding out of anger is especially unhelpful with things that are not in our control, such as how other people think, feel and behave. When we are angry with other people, we are most often having judgmental thoughts about them. We presume to know what is in their hearts and minds. However, even unusually intuitive people cannot know the motivations behind the emotions they sense or the complex interplay of events that brought them to this place at this time. Making assumptions that condemn and lay blame is not often useful. Even when the other person is clearly wrong, shaming and angry lashing out rarely results in deep and lasting change.

Angry reactions are also unhelpful when it comes to things that are within our control. Actions taken in anger are often not well-received and they can be impulsive and clumsily executed. Instead, we can note our anger and take time to investigate our inner experiences. This makes space for responding with wisdom.

Sometimes anger stems from an intolerance of personal vulnerability. The angry emotions are a self-protective reaction to pain or fear. In this case we can begin to acknowledge the vulnerable emotions behind the anger. We can attend to our own suffering non-judgmentally and send ourselves some compassion and kindness.

We may not be able to eliminate anger and it doesn’t help to suppress it, but we can see it as a useful signal. We can learn to notice it arising before it becomes overpowering and channel its energy for doing good, benefiting ourselves and others rather than perpetuating further harm. Operating from a place of calm rationality will almost always bring a better result than reacting angrily.

This site uses Akismet to reduce spam. Learn how your comment data is processed.